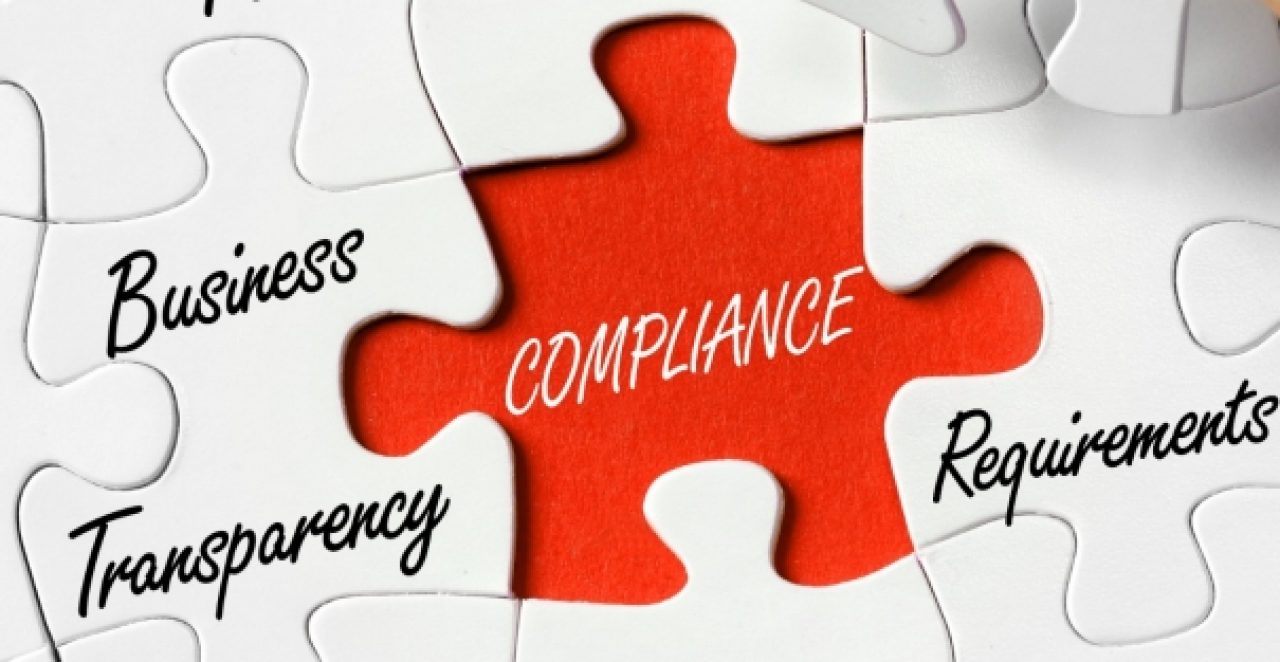 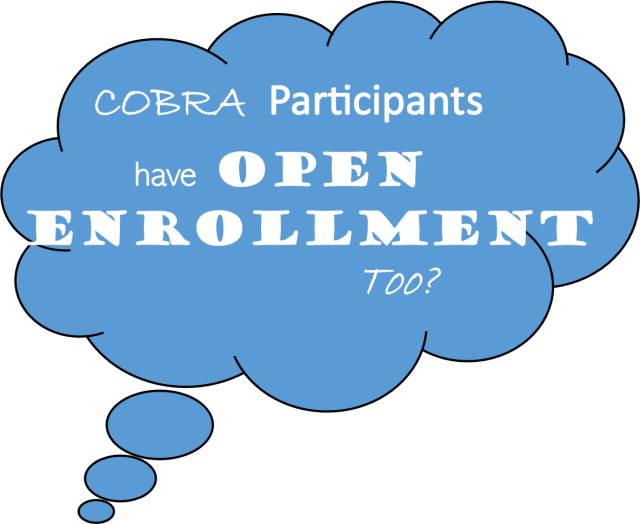 ‘Tis the season for not only the holidays, but many employers are in the midst of open enrollment.  There’s so much to think about that it’s easy to forget important tasks, like notifying COBRA participants.

Have you sent COBRA open enrollment kits notifying your COBRA participants* of the new plan options and rates?

If  “Ummm….what?” is your first thought, keep reading……

COBRA regulations provide that COBRA participants (i.e. qualified beneficiaries) have the same health insurance rights during open enrollment as their former employer’s active employees. So although, a qualified beneficiary was only entitled to continue the coverage in place immediately before the qualifying event,  COBRA participants at open enrollment may:

to the same extent that similarly situated active employees can.

Therefore, COBRA participants must also receive an open enrollment packet containing not only any updated information about the plans and changes to rates but also all required open enrollment disclosures.

Many employers use a COBRA administrator and believe they automatically send all required notices on their behalf. However, COBRA open enrollment packets are generally an opt-in service, often for an additional fee.  Ultimately it is the employer who is responsible for ensuring participants receive the information, so it is worth reaching out to your COBRA administrator if you are not sure whether they’ve been sent.

*For the purposes of Open Enrollment, COBRA Participants are individuals currently enrolled and paying for COBRA, individuals in their 60-day election period, and individuals who have elected, but not yet paid for, COBRA. 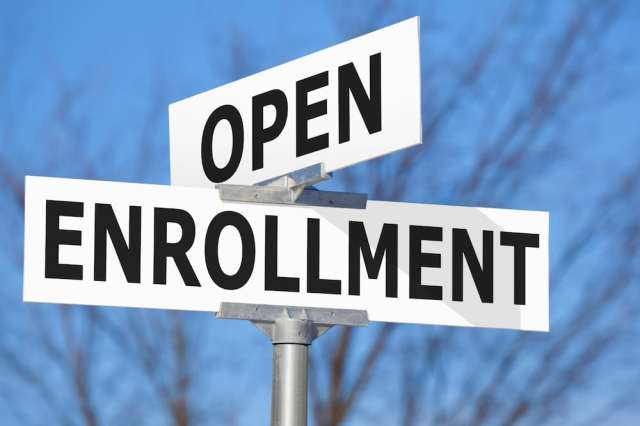 Q: It is open enrollment at my spouse’s employer. If my spouse adds me to their medical plan can I drop my coverage on my employer’s plan, even though it’s outside of our open enrollment?

A: The IRS has rules (26 CFR § 1.125-4 – Permitted election changes) on what changes to pretax elections outside of open enrollment are permissible. It’s these rules which are used to create an employer’s Section 125/Cafeteria plan. An employer may design their plan to be as permissive as the IRS (which in my experience is the norm) but there is no requirement to recognize all of the permitted election changes. So, your employer’s Section 125/Cafeteria plan document is where one should look for which rules are permissible for an employee, based on your employer’s plan design.

That being said, assuming your employer is using an “off the shelf” plan and are as permissive as what the IRS allows, then yes, change in coverage under another employer’s plan is a permissible midyear change event allowing you to decrease or revoke your election if you have elected corresponding coverage under your spouse’s plan.

So assuming your employer’s S.125/Cafeteria plan recognizes “change in coverage under another employer plan” as a permissible mid year change event, if you enroll in medical coverage under your spouses plan during their open enrollment, you may drop your employer’s medical plan. The IRS allows open enrollment under another employer plan/different plan year to be a permissible midyear change event to help resolve “election gridlock”. Otherwise an employee would have to have double coverage or go without coverage for a period of time in order to “synch” up with the plan they want to be enrolled in.

However, keep in mind, the ‘consistency rule’ always applies with any midyear event. Which means the election change must be on account of and corresponds with the change on the other employers plan. e.g. if only enrolling in spouse’s medical, you couldn’t also drop your dental coverage 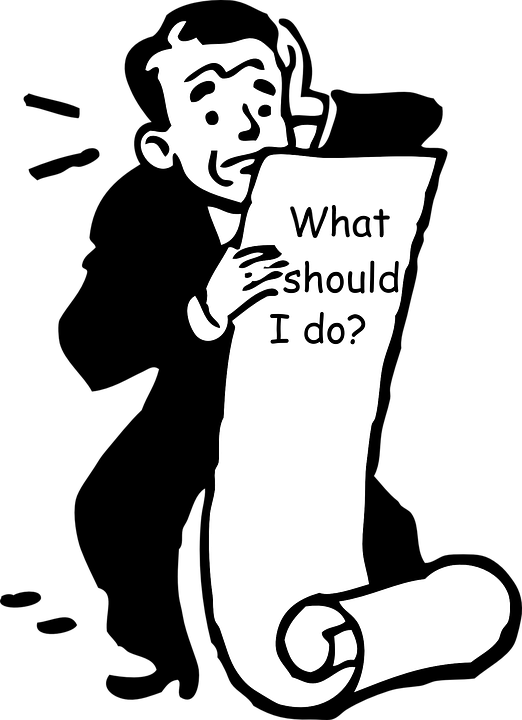 COBRA regulations state that COBRA qualified beneficiaries (QBs) are entitled to the same rights under a group health plan as are similarly situated non-COBRA beneficiaries i.e. active participants (§ 54.4980B-5 Q&A-1).

During open enrollment, COBRA qualified beneficiaries have the same rights as active employees. (§ 54.4980B–5 Q&A–4c)  For instance, they may:

To be compliant, during open enrollment it’s important that employers remember to provide COBRA QBs everything they would need to make an informed coverage decision and election as if they were active employees.  The open enrollment materials must be provided to QBs in a manner that is “reasonably expected to ensure receipt”. Generally, this would mean 1st class mail to the last known home address. A Certificate of Mailing is also a best practice.

Who Is Responsible for Offering COBRA Open Enrollment?

What if an enrolled participant doesn’t send back their OE election?

There are different schools of thought on the answer to this question.

There is nothing in the regulations that says failure to re-elect during OE is cause for termination. So, it’s my understanding, if the plan(s) the participant is on didn’t change, then their coverage should roll over into the new plan year and they should be billed the new plan year’s premiums. If the plans did change, they should be enrolled in the plan most comparable (i.e. what replaced the coverage they had).  If they fail to send in payment, they’ll term for non-payment accordingly.

However, that being said, at least one court has held that the plan may terminate COBRA coverage for a QB who fails to re-enroll after they are provided OE materials and are notified that failure to re-enroll will lead to a loss of coverage. This is because, §54.4980B-7, Q/A-1(b), provides that “a group health plan can terminate for cause the coverage of a qualified beneficiary receiving COBRA continuation coverage on the same basis that the plan terminates for cause the coverage of similarly situated nonCOBRA beneficiaries.”  So some interpret this, (as did the the court ruling) to mean, because COBRA participants have the same rights (and responsibilities) during open enrollment as similarly situated employees, if an employer requires active enrollment by employees during open enrollment, they can require active enrollment by COBRA participants too.

In my experience, it’s best to keep QBs enrolled on their current plans (or the the plans most comparable to what they currently have) unless an employer is provided other guidance from their legal counsel.

NOTE: Don’t forget about your employees on FMLA. They too have the same open enrollment rights for the health plan as active employees

Did you miss one?

Looking for something specific? I may have blogged about it.